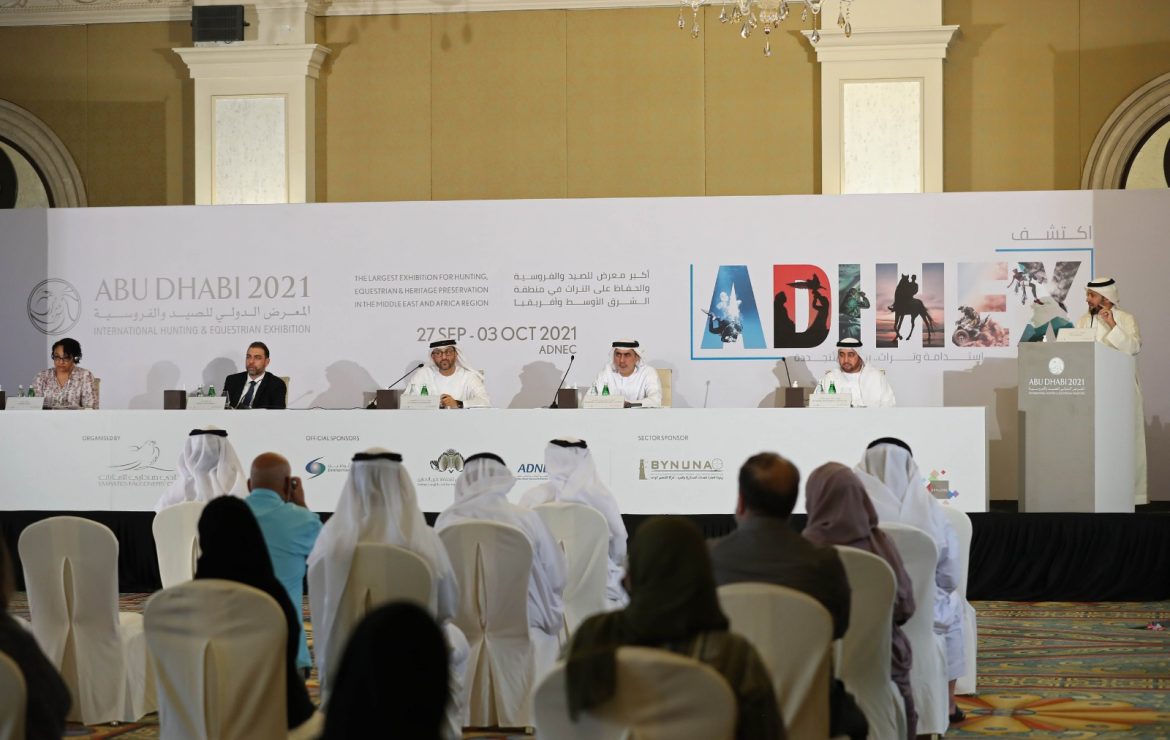 Under the patronage of H.H. Sheikh Hamdan bin Zayed Al Nahyan, The Ruler’s Representative in Al Dhafra region and Chairman of the Emirates Falconers’ Club, the activities of the 18th edition of the International Hunting and Equestrian Exhibition (Abu Dhabi 2021), will be launched on Monday morning, with the participation of 680 companies and brands from 44 countries, This will be organized by the Emirates Falconers Club within the period from 27 September to 3 October, 2021. 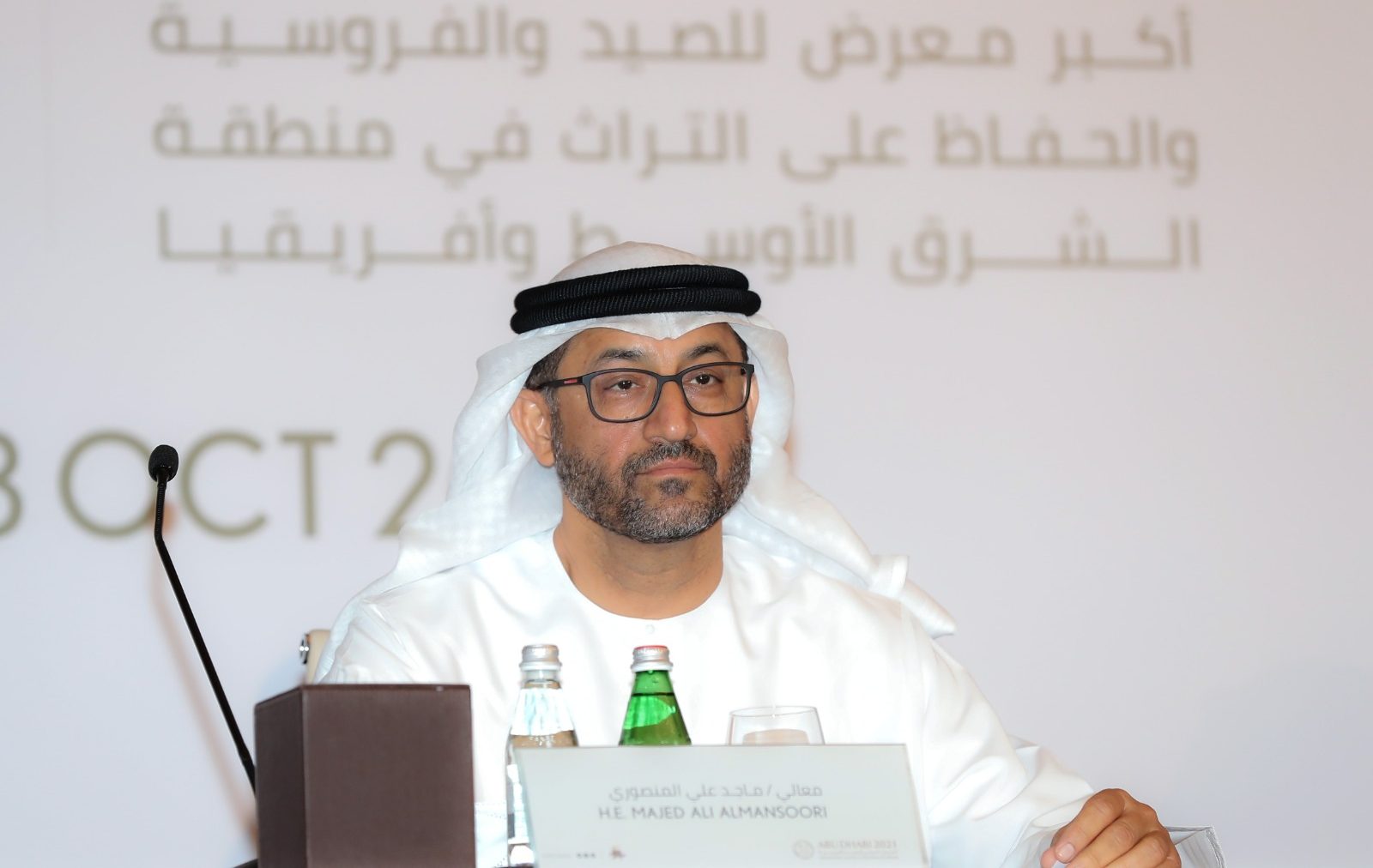 H.E. Majid Ali Al-Mansoori, President of the Supreme Organizing Committee of the exhibition, the Secretary-General of the Emirates Falconers’ Club, has revealed that there are 319 local exhibitors (owning about 85 international brands) will be there in the next edition; as well as, 32 governmental and official entities, and more than 20 local and international falconry clubs, associations and institutions, on a total area of approximately 50,000 square meters, the largest area in the history of the event, which in this year it witnesses also the most diverse and rich activities through more than 90 live activities, interesting competitions, and charming heritage and sports performances that the audience of the exhibition await for. In addition to, there will be about 50 purposeful educational workshops, while more than 125 Emirati, Arab and international artists display their creativity in the arts and crafts sector. 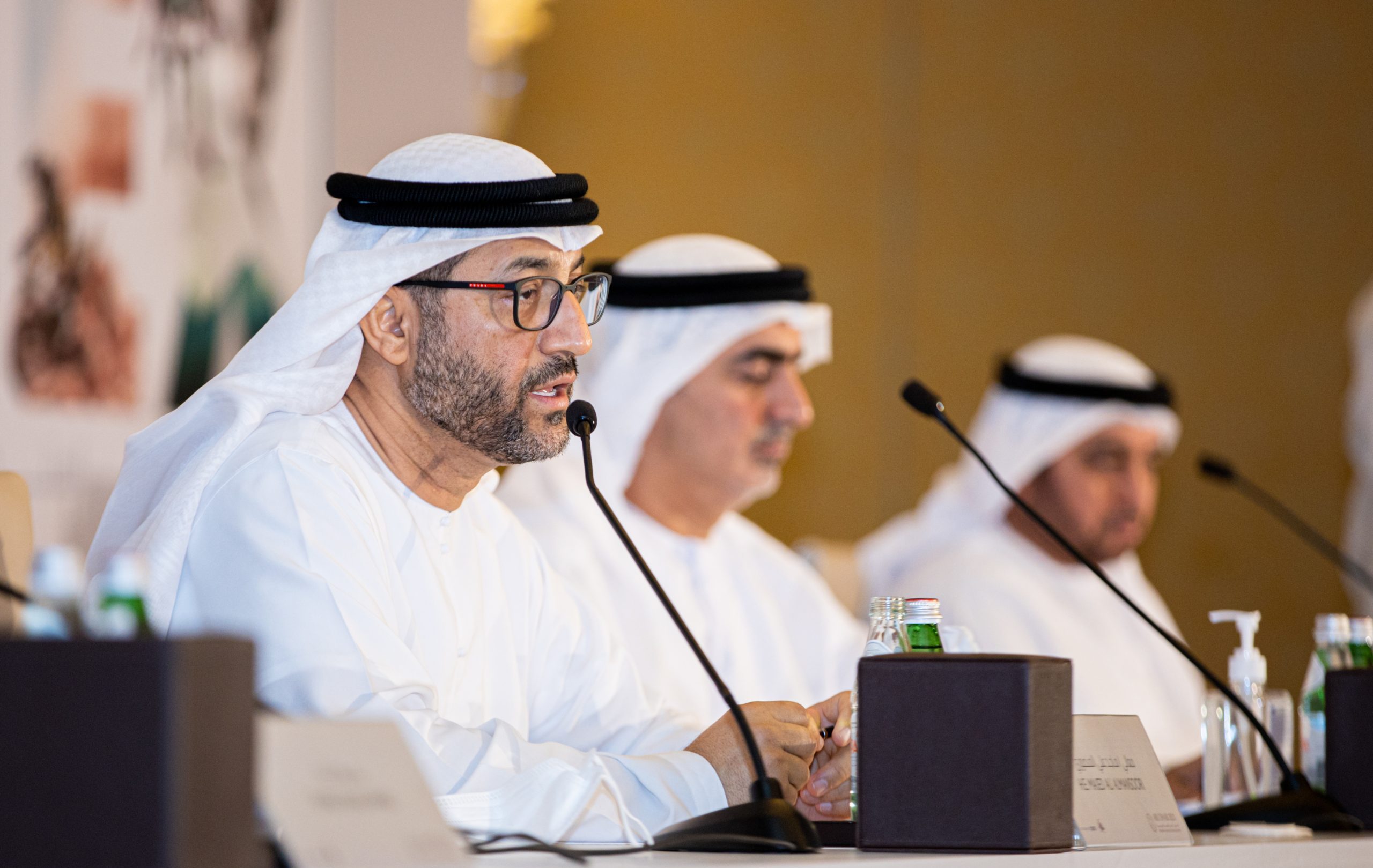 In his speech during the press conference, H.E. Majid Ali Al-Mansoori, President of the International Association for Falconry and Conservation of Birds of Prey (IAF), said that hunting and equestrianism are the sports of our fathers and grandfathers, whose noble morals we inherited from the late Sheikh Zayed bin Sultan Al Nahyan – May God rest his Soul in peace  – who is still highly regarded worldwide for his well-known efforts in the field of sustainable fishing, heritage preservation and species conservation, and we had the honor of his historical visit to the events of the first edition of the Abu Dhabi Hunting Exhibition in 2003, the event that had a wide impact on the world of falconry in subsequent years, and became a renewed occasion to hold on to the authentic past, the common human heritage, and the preservation of nature.

He stressed that on Zayed’s approach, we are following today the process of heritage preservation under the directives of His Highness Sheikh Khalifa bin Zayed Al Nahyan, President of the State, may God protect him, and the constant support and follow-up of His Highness Sheikh Mohamed bin Zayed Al Nahyan, Crown Prince of Abu Dhabi and Deputy Supreme Commander of the Armed Forces, expressing our pride that the next edition of the exhibition will be concurrent with the United Arab Emirates’s celebration with its fiftieth anniversary. The generous sponsorship of ADIHEX by His Highness Sheikh Hamdan bin Zayed Al Nahyan, Representative of the Ruler in the Al Dhafra Region, President of the Emirates Falconers Club, is the main factor in the success of the event, which has become one of the most important global stations concerned with cultural heritage and sustainable hunting, and represents the leadership’s keenness to consolidate the concepts of originality and pride in the national identity, and to enhance Abu Dhabi’s position as a prestigious economic center.

With the launch of its eighteenth edition next Monday morning, the Abu Dhabi International Hunting and Equestrian Exhibition (ADIHEX) reaffirms its well-known position at the regional and international levels, and its growing role in promoting sustainable hunting, bringing together hunting enthusiasts in all its aspects and lovers of horses, camels, heritage, and art in one forum that everyone awaits in every year. The next edition will provide new features for visitors and exhibitors that enhance the experience of their attendance and participation by providing them with the opportunity to see the latest innovations of local and international experts and hear their opinions. This year, the exhibition management has designed a special program for exhibitors in order to match the works among them, as well as to provide interesting surprises for the audience.

The live performances arena is the heart of the event and the focus of the most beautiful live performances that can only be seen at ADIHEX, including musical and heritage equestrian shows, horse training workshops, Arabian camel auctions, archery with a bow and arrow on horseback, and workshops on the basics of driving in the land and adventures, as well as an educational journey about the roots of Arabian falconry and its unique characteristics presented by Mohammed bin Zayed Falconry and Desert Physiognomy School, and much more.

While the Japanese pavilion in the (Abu Dhabi 2019) edition won the admiration and appreciation of visitors, the exhibition signed a broad partnership agreement with The Game Fair in the United Kingdom, where many British companies are present at this year’s Abu Dhabi exhibition, reflecting the keenness to enhance cultural exchange as an essential element in the development of civilization, the celebration of the ancient British heritage, and the embodiment of the strong historical ties between the two friendly countries.

Organized by the Emirates Falconers Club, in cooperation with UNESCO and the International Association for Falconry and Conservation of Birds of Prey (IAF), the conference focuses on the “future of falconry sport” through a series of specialized workshops, which represents an important step in enhancing the capabilities of the countries participating in the registration file of falconry as a human heritage in UNESCO, and for all societies that still practice the sport of falconry, especially through about 110 falconry clubs and institutions representing 90 countries with a total of more than 75,000 falconers around the world.

The exhibition is being held for the first time in its history over a period of 7 continuous days, reflecting the increasing public turnout, and responding to the aspirations of exhibitors in the 11 sectors that constitute the largest event of its kind in the Middle East and Africa region. The exhibition was able to gather major brands and specialized companies, to exchange knowledge, experiences, launching new products and services, expanding businesses, conducting business deals and meeting clients and industry figures face to face.

Al Mansoori also stressed that the exhibition, as it returns again after a long wait, with a distinguished edition that extends over a whole week, and its distinguished activities combine the magic of heritage and the latest technology solutions in the world of hunting, equestrian and environmental protection, confirms that it is an important event in the world that is launched from Abu Dhabi to all those interested and all nationalities. In Abu Dhabi, we are constantly striving to provide platforms that allow us to highlight the heritage of the Emirates in a distinctive way to the public coming from different nationalities.

At the conclusion of his speech, he expressed his great appreciation for the role of the sponsors and the important supporters of the event and the participation of the official authorities in the efforts to contribute to the preservation and visibility of heritage globally, and welcomed all local, regional and international exhibitors who share the joy of a new start for the exhibition. On behalf of the Supreme Organizing Committee, he extended his thanks and appreciation to all media representatives for their permanent contribution to highlighting the exhibition’s activities, as they are the most important axis in translating the story of the event’s success and excellence. He wished all visitors and guests from all over the world a fruitful participation, a pleasant stay in the UAE, and enjoyment of the exhibition and its interesting activities.

For his part, Omar Fouad Ahmed, Director of the Exhibition, revealed four unique educational platforms, included in the Abu Dhabi International Hunting and Equestrian Exhibition 2021,that will bring together regional and international experts. Such four platforms are sustainability, falconry, equestrian and arts. This is aimed to make those experts share their expectations and professional visions about these industries to all exhibitors.

The showground also presents rich activities, foremost of which is a special show on the occasion of the golden jubilee of the United Arab Emirates with the participation of Abu Dhabi Police, the Zabyan Equestrian Club, and the Boudheeb Equestrian Academy; in addition to the Saluki Jamal Competition organized by the Arabian Saluki Center in Abu Dhabi, and performances of archery with the traditional bow and arrow on horseback – In addition to the event of ground shooting – Amna Al Jasmi – Caper’s stables, and shows of some types of historical martial arts (fencing with the traditional Arab sword). The Emirates Arabian Horse Association presents the “Free To Go” show, the National Exhibitors Tournament, and the National Arbitration Tournament. 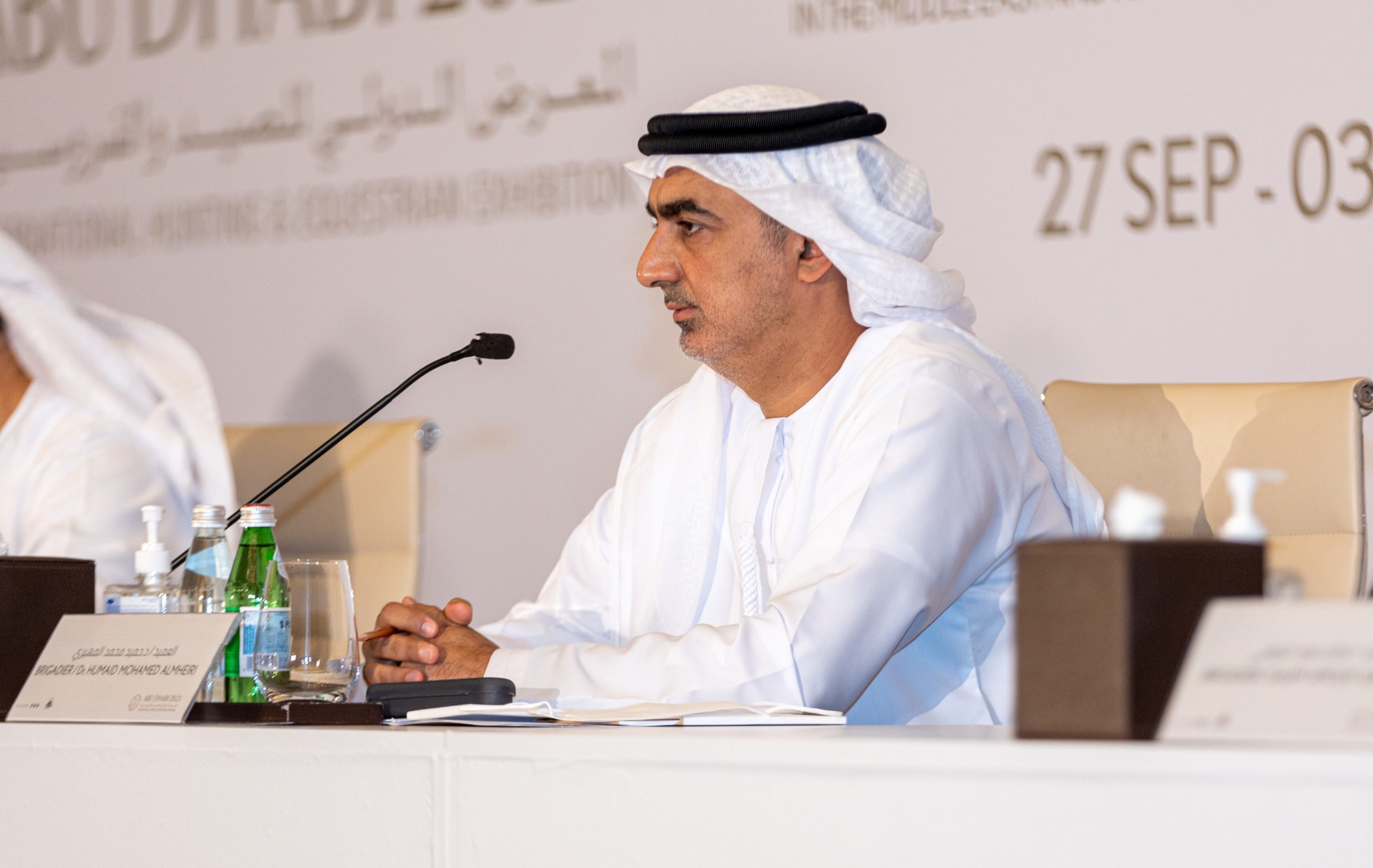 Regarding the procedures for purchasing hunting weapons during the exhibition, Brigadier General Dr. Hamid Muhammad Al Muhairi, Director of the Directorate of Weapons and Explosives at the Ministry of Interior, said that this is subject to specific criteria and conditions, the most important of which is that the age of those wishing to purchase should not be less than 21 years. He pointed to the launch of a special electronic application that includes all relevant details, and it will be announced clearly to all visitors to the event at the Abu Dhabi National Exhibition Center. The Abu Dhabi Hunting Exhibition attracts major American and European companies that manufacture hunting weapons, which gives great importance to the largest exhibition of its kind in the Middle East and Africa.

For her part, Joan Cook, representative of the British Countryside Festival “The Game Fair”, expressed her happiness for the important partnership with the Abu Dhabi International Hunting and Equestrian Exhibition, noting the participation of more than 800 companies and brands in the British festival in its last session in the fields of rural sports, shooting and fishing, Hunting with dogs, equestrian, falconry, and ancient lifestyles, which are attended annually by about 115 thousand visitors during 3 days from lovers of countryside, hunting and heritage. She expected that this partnership between the two major events would bring many benefits to both parties in the fields of trade and cultural exchange between the two countries. 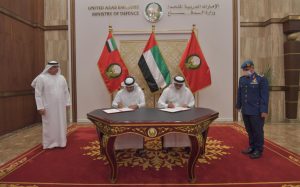 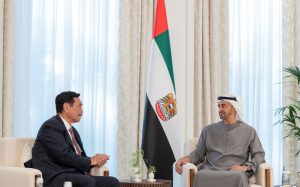