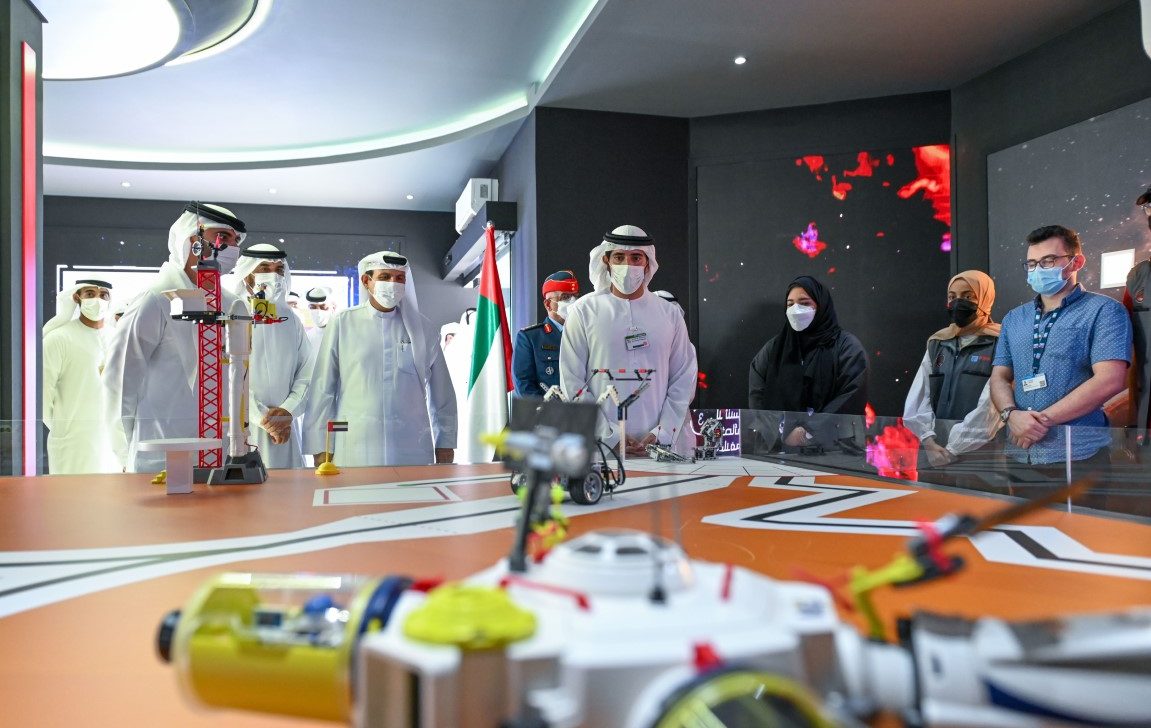 His Highness was also accompanied by Major General Staff Pilot Ishaq Saleh Al Balushi, Executive Director of the Military Organising Committee of the Dubai Airshow 2021. During his tour, HH Sheikh Hamdan bin Mohammed visited the stand of UAE company Tawazun’s subsidiary International Golden Group where he was briefed about its security and defence solutions.

His Highness also visited the stand of Korea Aerospace Industries Ltd. where he learned about its FA-50 plane, Surion multi-role utility helicopter, and its Light Attack Helicopter.

Another stop on His Highness’s tour was the stand of CAE, a Canadian simulator specialist, where he was briefed about its Bombardier Global 6500 full flight simulator. The advanced simulator will be available for training in 2023 at the Emirates-CAE Flight Training (ECFT) Centre in Dubai, where it has been deployed for the first time outside North America.

His Highness also visited the Bellwether Industries pavilion, where he learned about the Antelope, an urban vertical take-off and landing vehicle with hidden propellers as well as the Manta Aircraft ANN2, a two-seat model for personal air mobility.

At the outdoor exhibition area of Dubai Airshow, His Highness visited the stands of a number of Russian exhibitors, where he learned about Sukhoi, Irkut, and Aurus planes, including Irkut’s MC-21-310 airplane, and a multi-role utility helicopter, among others.

His Highness also visited the stand of the UAE Airspace Agency, where he was briefed about its latest programmes and initiatives which are part of the ambitious UAE space programme.

The 17th edition of Dubai Airshow saw the signing of deals worth over AED260 billion in the first three days of the event, which reflects the importance of the event for the global aviation and aerospace industries. Dubai Airshow is the first major aviation industry event held after the onset of the COVID-19 pandemic. The mega event offers a platform to showcase a wide range of technical solutions that support the recovery of the industry in the wake of the pandemic. Dubai Airshow 2021 also includes a new dedicated startup event, VISTA, a platform for innovators, creators and market disruptors to display the latest technologies.