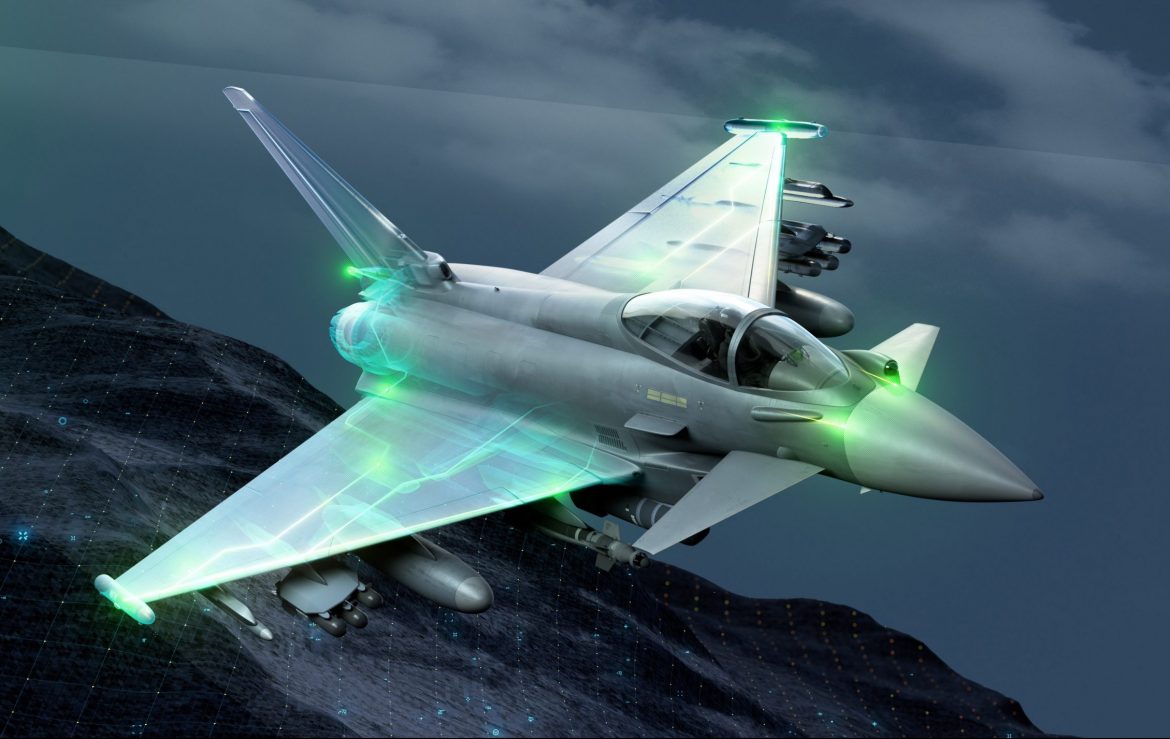 Eurofighter Typhoon delivers an impressive level of flexibility and efficiency, as it is the only fighter equipped with adequate weapon availability (up to 6 bombs whilst also carrying six missiles, a cannon, and a targeting pod) and sufficient processing power to simultaneously support missile in-flight updates and bomb in-flight targeting, making it a true swing-role aircraft.

With multiple countries involved in its development and use, this European aircraft’s design enables its upgrade and the extension of its life cycle.

The combination of a proven, agile airframe built from stealth materials with the latest sensor, control, and weapons systems ensures optimum combat capability – both beyond visual range (BVR) and in close combat.

The weapons systems, navigation technologies, and control infrastructure are all designed to be upgradable, to continue to enhance the overall performance of the aircraft.

The aircraft is built using advanced composite materials to deliver a low radar profile and strong airframe. Only 15% of the aircraft’s surface is metal, delivering stealth operation and protection from radar-based systems.

Pilots were included in the design of the Eurofighter Typhoon from the earliest stages to develop a deliberately unstable airframe that can still be flown effectively, delivering both superior maneuverability at subsonic speeds and efficient supersonic capability to support the widest range of combat scenarios.

Developing cutting-edge engine technology has been a key part of the Eurofighter Typhoon project from the start. Four global companies have jointly developed the high-performance EJ200 power plants that each provide 90kN of thrust from a small lightweight engine with high strength and high-temperature capability.

The two-spool design with single-stage turbines drives the three-stage fan and five-stage HP compressor with annular combustion with vaporizing burners.

This allows Eurofighter Typhoon to cruise at supersonic speeds without the use of reheat for extended periods.

The engines deliver 1,000 flying hours without needing unscheduled maintenance through the use of advanced integrated Health Monitoring for class-leading reliability, maintainability, and Through Life Cost.

Sensor fusion is key to Eurofighter Typhoon’s leading effective infrared sensors which give the pilot unparalleled situational awareness, seamlessly integrating data and updating the battle space picture for actionable intelligence, in turn, this Fusion Information Superiority allows the pilot to dominate the battlespace.

The needs of the single-seat pilot have been paramount, throughout the design process of the Eurofighter Typhoon, which resulted in paying a lot of attention to the control and information interfaces throughout the unique glass cockpit, from the head-up, head-down, and head-out systems to all-round vision.

The advanced cockpit design and layout are based on an extensive series of formal assessments in a rapid prototype facility, undertaken by operational pilots from air forces flying the Eurofighter Typhoon. Using and upgrading the advanced digital technology not only enhances operation and survivability but also simplifies aircraft maintenance.

Other features such as Direct Voice Input (DVI) and Hands On Throttle And Stick (HOTAS) control functions have been implemented on the Eurofighter Typhoon to drastically reduce the pilot’s workload.

Furthermore, Voice + Throttle And Stick (VTAS) enables single pilot operations even in the most demanding Air-to-Air, Air-to-Surface, and swing-role missions.

In addition to Short Range Air-to-Air Missiles (SRAAM’s) and the 27mm Mauser Cannon the Eurofighter Typhoon carries the latest beyond-visual-range (BVR) Air-to-Air missile technology, such as the METEOR advanced long-range missile, which provides the largest No Escape Zone of any Air-to-Air weapon, enhancing long stand-off range and ensuring the high probability of interception, air superiority, and pilot survivability.

Weapon guidance is provided by an active radar seeker with mid-course updates via data link.

Thanks to the latest upgrades, Eurofighter Typhoon can carry Paveway IV bombs and Brimstone missiles, which provide high levels of operational flexibility.

The combat-proven dual-mode guidance system, coupled with the aircraft’s high burst and penetration capability, makes it possible to make the decision of target engagement right up to the point of release.

Flexible couplings connect the fuel pipework built into the three main fuselage sections and wings provide a simple method to connect the fuel tanks, which all have fuel-flow proportioners to maintain the center of gravity alongside relief valves to maintain air and fuel pressures. The intelligent computer-controlled fuel system ensures long-range, flexibility, and safety.

Eurofighter Typhoon is the only fighter available on the market able to offer such wide-ranging operational capabilities, while at the same time delivering unparalleled fleet readiness.

The aircraft’s ability to support both Air-to-Air and Air-to-Surface scenarios simultaneously allows the fleet to be used for the widest range of operations.

Furthermore, the aircraft’s design focuses on high reliability, low maintenance and the ease of upgrading systems, giving it the maximum possible availability.

The unique heritage of multiple customers means the Eurofighter Typhoon platform was designed to be interoperable with the widest range of aircraft and other ground systems, providing the maximum flexibility for any Air Force.

Eurofighter Typhoon works seamlessly and in real-time with both ground control and other aircraft types in combat, defense, surveillance, and monitoring scenarios.

The upgrade of the radar to CAPTOR-E will bring significant operational benefits. The design of the airframe allows Eurofighter Typhoon to deliver the largest electronically scanned array for increased detection and tracking ranges, advanced Air-to-Surface capability, and enhanced electronic protection measures.

Eurofighter Typhoon has an unparalleled safety record. Proven in battle and hostile environments, it is designed to keep its pilots safe and operational.

Furthermore, the leading-edge sensor technology delivers unprecedented accuracy for both Air-to-air and air-to-surface operations in all weather conditions. 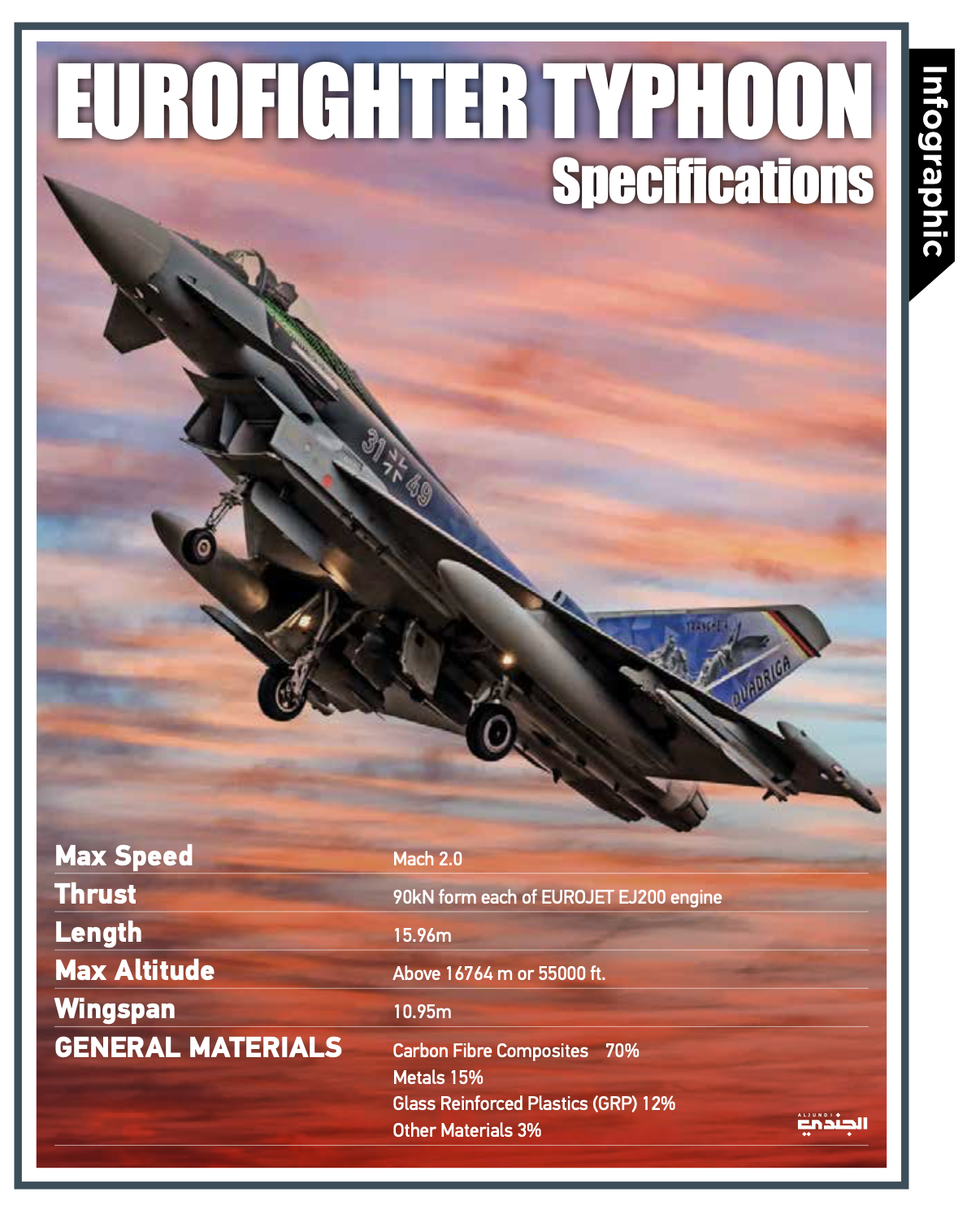